Casting Call for The Play, "The Heeey Baby Days of Beach Music", SC Beach Music Day book signing, and a lot more about the In-Men Ltd. 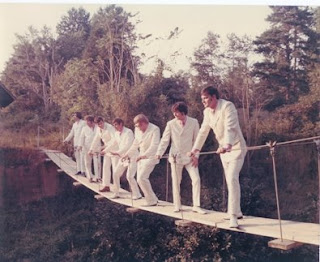 Casting Call for the play,

Or call for more information:

Note: Scenes from Act One are posted at www.heybabydays.com

Details coming soon on Francesco Calazzo radio show in
Casagiove, Italy featuring the music from Disk One & Two of “The Heeey Baby Days of Beach Music.”

We took a sabbatical from the blog and web site to catch up on some other matters. Hope to start posting again with more regularity.

We will be going back to Columbia, South Carolina for the third time for a book signing. We have not had a book signing in some time because we have sold out of new books in their original shrink wrap. The State Museum of South Carolina still has copies and we have been invited to South Carolina’s Beach Music Day on Saturday May 16 and will sign the books that they have left.

Where other “new” books can be found: (Sightings)

In addition to the State Museum, some Barnes & Nobles and Books-A-Million stores may have copies but check with the store before going. For instance, there is one copy available in Opelika, Alabama at the Books-A-Million store on Tiger Town, but none at the BAM at East Chase in Montgomery. There was one at the Barnes & Noble store across from Cumberland Mall in Atlanta but don’t know if any of these books at still available in those stores.

If you know any stores that have copies (in their original shrink wrap) let us know and we will post for those who are still inquiring and want a new copy. We only have used copies available which are available through ABE Books. (www.abebooks.com)


Comments on Book and the In-Men-Ltd.


Received your book as a Christmas present from my younger brother...have been going through it in bits and pieces and really enjoying it...brought back great memories...wanted to share a couple of things with you including a correction or two.

1. I was working for Curtom (Curtis Mayfield/Eddie Thomas) Records in 1968-1970 while I was a student at UNC Chapel Hill. Was a huge In-Men Ltd fan during the time Mickey Combs was singing lead. I was doing radio promotion for Curtom in NC and VA, and went to Chicago to the offices on South Stoney Island Avenue about once a month. Donny Hathaway was doing
some writing for Curtis at the time, and Jerry Butler and Major Lance were frequent office visitors.

Curtis loved Girl Watcher...thought the O'kaysions were black...and particularly like Jay of Jay and the Americans (I assume because he sung falsetto and covered some of Curtis' songs).

I recommended Curtis sign the In-Men...got them on a show together at the Cellar in Charlotte so Curtis could hear them...and the In-Men tore it up that night.

Then, I went with the In-Men into the Copeland Sound Studios...I think in G'boro but may have been Burlington...and they cut their entire set as if performing live. That's where the I'm Gonna Miss You cut came from. They also did their Rascals medley...Does Your Mama Know About Me...Don't Look Back...the Dione Warwick song "Don't Make Me Over," their intro medley
that included "I Thank You"...and assorted others...including "People." I'm guessing when I periodically see references to that...it also came from that session.

I've got a scratched and battered version of the acetate from that
session...but would love to get the digitalized version. Help me with that...glad to pay...can't find that CD anywhere.

You are correct, however, when you note that the recording was as a demo for Curtis.

Incidentally...Curtis provided them with the sheet music to I'm The One Who Loves You...the full orchestration...because that's the one he wanted them to cover. Not sure why it never happened...too bad.

2. When Sonny Long references playing with the Magnificent Men...he is incorrect in the location. It was actually at Marshall University in West Virginia...I went on that trip with them. The In-Men were in their white suits with pink ruffled shirts. Obviously that was before they became Peace Corps.

By the way...the In-Men did Stormy Weather during their set...but that was the only Mag Men song they covered.

Both bands performed well...and although I'm prejudiced...I think if it had been a battle the In-Men would have come out on top. But that close to the Mag Men's home base of Pennsylvania...they were the "big deal" that night.

3. I was a DJ in Rockingham...WAYN...during my high school days. Advertised Coachman & Four club often, as you can imagine. Used to get the groups coming through town for interviews and for promos...Drifters...O'Jays...Maurice Williams...etc. O'Jays did one for me that said "When we're not listening to Bill's Platter Chatter Show, Baby...we're asleep."

Used to interview Curtis a bit (before I went to work for him)...as well as Kenny Gamble and Leon Huff when the Intruders broke onto the scene.4. FYI...later (much later) in my career...I became president of the Cleveland Browns football team...1996-1998...when there was actually no team...my role was to build the new stadium...sell the franchise for the NFL...and get the team successfully back in town.

Former Brown running back Jim Brown became a great friend, and we produced a music video with original music (written by Michael Stanley and Bob Pellander of the Michael Stanley Band in Cleveland). We shot some in Cleveland...some in LA. Used Bobby Womack as lead singer...as well as Gerald Levert (Eddie of O'Jay's son). Also the Dramatics (What you See is What you Get), Ali Williams (later version of Temptations singer), Syretta
Wright (Stevie Wonder's ex-wife), Freda Payne, Lou Rawls, Clarence Clemons (E-Street Band) on sax, plus Drew Carey and a lot of ex Browns. Get me an address and I'll send it to you...without question the best sports team music...won a national Telly award...it's called "Here We Go Again" and has some vintage Browns footage in addition to the production video.

Will think of more and let you know.

Help me get clean version of the In-Men items and any other In-Men stuff you have ... reunion CD???...other.

Great work on the book. Not only informative...but layout TERRIFIC. Very
impressed.

What great info ! I have been having a case of "writer's block" for the Hey Baby Days' blog but you have cured that with your email so expect for it to appear tomorrow. The recording that you reference has been made into an incredible medley by Tim Easton which I am sure we can get you a copy.

I had hoped it would have been release. It's top notch. By the way I am sending a copy of this to Sonny Long. Are you aware that they will be appearing at a reunion of the Coachman and Four. I hope to attend. Please continue with any other memories as this is the essence of the blog.

Not aware of the Coachman reunion, but please let me know when and where. Coincidentally, I just spoke to Wilson Howard about a business matter last week.

Also...go to my company website and click on the link for PSE Broadway. Be sure to let Sonny know about that as well. I think he'll remember me. Tell him I was the skinny kid with glasses who went to Carolina.

Incidentally, he may remember I set up a few old reel-to-reel recorders and taped the In-Men at the Keg in Salisbury...perhaps in summer of 1968...but may have been sooner than that.

I think I recall Sonny playing both guitar and drums, actually, but not sure about that.

As for Broadway, although most of my activities have been in the sports arena...with the Browns, other NFL items, and a great deal of NASCAR-related work...I'm producing my first Broadway musical...have hired Richard Frankel Productions as General Manager and co-Executive Producer...they did Smokey Joe's Cafe and teamed with Mel Brooks on The Producers and Young Frankenstein...

I've secured the underlying rights to the South African apartheid story from Zindzi Mandela...Nelson Mandela's daughter...and we've hired a writer/director and are currently working to retain our composer/lyricist.

I think Sonny...with his enjoyment of music...would get a kick out of that.

Feel free to forward my email address and this correspondence to him. I get to Charlotte periodically...my offices are in Raleigh and Phoenix...so maybe he and I could hook up at some point for lunch.

Meanwhile, I look forward to talking further and joining you at the
Coachman reunion. I've got a lot of friends who would attend...including some business partners of mine from Alabama who attended Pembroke 40 years ago.

Thanks for the email.

I don't have all the details of the reunion but hopefully someone will see this posting and fill in the blanks. Thanks for all the detail you provided. As you know, we dedicated a lot of ink in "The Heeey Baby Days of Beach Music" to the In-Men Ltd. and I think you know why. Unless you saw them perform back in the 60s, you might think that they were just another band. We know better. For them not to have really gotten out in the national main stream is best termed in Lucy's words, "The fickle finger of fate."

P.S. I usually have a photo with a posting. If I can find the photo of the In-Men Ltd. in the white suits, I put it on.

CDs are coming your way courtesy of Sonny Long. Here's the link to the information about the Coachman & Four reunion. Sounds like a great time with many bands from the golden age.