Cliffhanging at the Ember's Club during the Hey Baby Days

It was almost 50 years ago when the ad below ran ...nothing has changed much except for the price of admission ... The Embers are still swinging as well as "churning and burning" 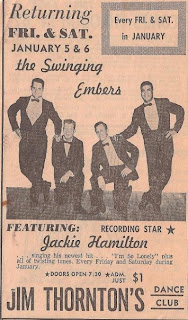 We still continue to get great emails along with photos and band fliers etc. from The Heeey Baby Days of Beach Music. Today's items are very special and are courtesy of Tim Williams. Can you imagine seeing an advertisement for the Swinging Embers at Jim Thornton's Dance Club ? and if you want another treat, order Disk 3 of the HBDBM compilation and listen to the "one take" sound of the Cliffhangers, the house band at the Embers Club.

From: Tim Williams
Posted by heybabydays at 11:58 AM 1 comment: