1.      Most of the “youngsters” in the band have been Swingin’ Medallions  longer than the “original” members who recorded the iconic party song. However, once a Medallion, always a Medallion just ask all 96 former members of the band that reunited this past Friday night at the birth place of the Swingin’ Medallions, NINETY SIX, SOUTH CAROLINA although the county seat of Greenwood County is the official home town. 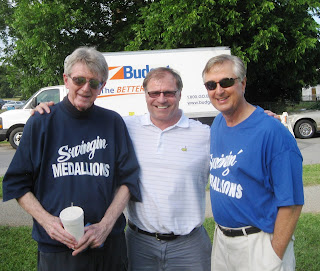 2.      The mayor of Ninety Six South Carolina gave keys to the city to all 96 members of the band that attended. He is apparently a man of strong faith so we looked around a found a copy of “The Heeey Baby Days” and presented him one of those…I asked if he had any spare keys but he was fresh out. He did say that the book would go on display at the visitors' center.


3.      The mayor also made mayoral proclamations honoring the band and their contributions to the city. It was apparent  that the entire population turned out for the gig and with such a gala and the good time had by all,  the mayor should have no trouble being re-elected.


4.      When I told Perrin Gleaton, the first guitarist for the band, that it’s all about the horns, I thought he might hit me. Although known for their horns, he reminded me that not one horn was raised on "Double Shot." Funny, but "Jimbo Doares said the same thing .


5.      Perrin appeared on the band's first single on Dot Records, “I Want To Be Your Guy.” He left prior to “Double Shot” and was replaced by Jimbo Doares. Fred Pugh and Perrin were successful with other Carolina bands. Both were Swingin' Friday night.  There are still folks who remember Fred from the Old Hickory in PC and his “Night Train” routine.


6.      There were some that were not present and they were sorely missed including those who are deceased: including: Steve Caldwell – saxophone, Charlie Webber-trumpet, Johnny Cox- Saxophone ; David Eastler-Drums, Gerald Polk-saxophone    Members  of their families or representatives were there to receive copies of the proclamation.


7.      Other living members of the band that were of the 60s that were not able to attend  were  Jim Doares- Guitar, Grainger “Brother” Hines- Saxophone , Ron Nobles - Drums and Bobby Taylor.   Five of the Eight that recorded “Double Shot” were on stage. Many who played with the band when it was known as The Medallions were present ( 1963-64).


8.      Dale Williams, Medallions lead vocalist in the 80s  voice sounded as good as he did back then… however… the rain came and the third set was cancelled so we did not get to hear Dale sing “I’m Going To Make You Mine” a composition that was written by another Medallion from the 80s, Hazen Bannister. 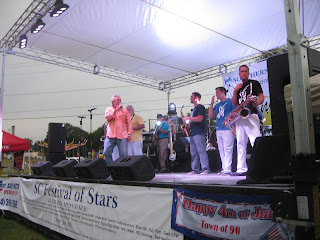 96       If you like horns, there were plenty, with as many as seven going full blast at one time... If everyone who has claimed to have played saxophone at one time or another for the band actually did and were  present Friday night, they would have not been able to fit them in the Georgia Dome.

Note: we have taken some license in recounting the events that took place in Ninety Six South Carolina this past Friday night. e.g We really didn’t count all the band members that were present… there may have been more than Ninety Six including members of the band that were “Medallions” before the band even added “Swingin”  to Medallions. These gentlemen appeared to very hip so we now know that adding “Swingin” in 1965 had little to so with lifestyle. I remember stories from those who saw the band in their early days especially at UGA. They never refer to the band as the “Swingin’ Medallions”, but rather as “The Medallions”. This is proof positive that there are folks from the 60s that were actually there and do remember. 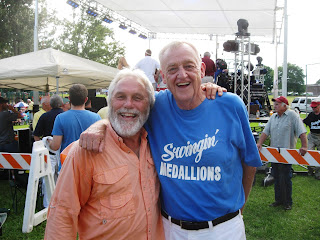 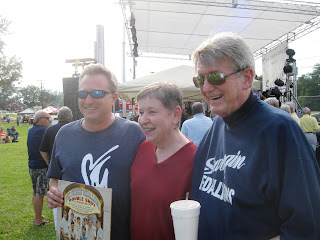 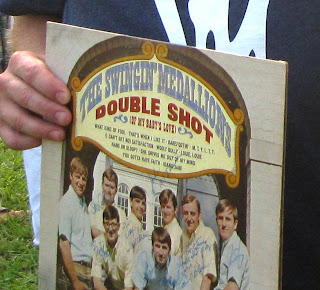 Only one signature missing from this one 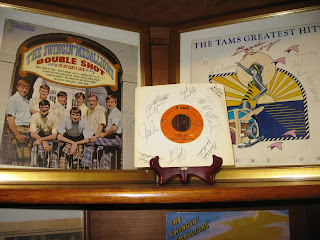 Memorabilia from an Atlanta based collector includes album cover with signatures of all eight members who recorded "Double Shot", an original 45 RPM on the "For Sale" label plus signed Tams' album with signatures of Joe Pope, Charles Pope, Robert Smith, Horace "Sonny" Key and Joe Jones 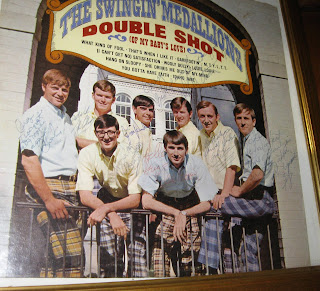 Album cover with ALL eight signatures 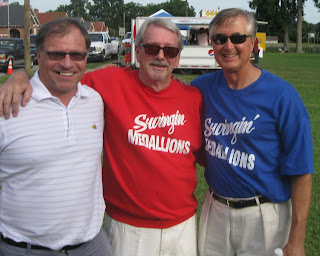 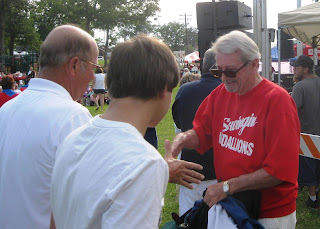 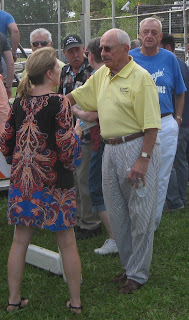 Fred Pugh explains to fan about how he was able to wow the fans back at the Old Hickory in 1964 with "Night Train" while Carroll Bledsoe looks on... perhaps thinking that Fred's memory is a little fuzzy. 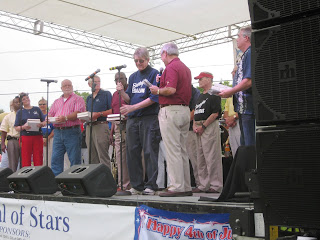 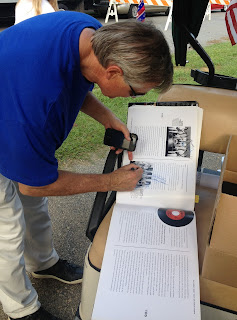 Brent Fortson Signs two copies of "The Heeey Baby Days of Beach Music." With his and Joe Morris's signature, we now have two books with autographs of all the members of the band and several hundred other signatures of members of bands from the 60s. 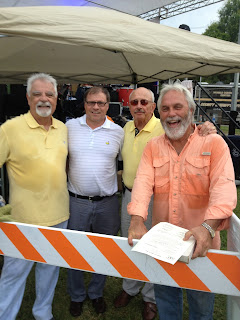