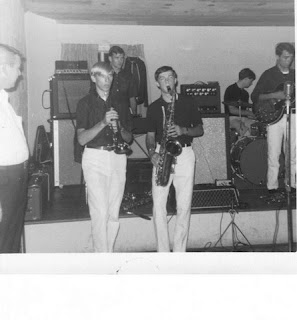 Need to post more as we continually get interesting emails even though the book was published over five years ago . Sorry that the books are all gone... BUT we are considering making the book available as an E Book ... let us know what you think.

For a look at the Entire Original Villagers From Union, SC, Click on the following link

The Original Villagers group is already listed on your internet site, but I wanted to send some updated information about the group. In 2010 we got back together for only the 2nd time in 40 yrs and performed at the Party in the Pines Festival in Whitmire, SC and then again in Oct 2010 at the Oktober Fest in Newberry, SC. Now we are looking at the possibilites of going into a studio.

I have attached some photos of the events plus a couple old pics I came across in case you are interested. The 1st photo is a group shot at the Party in Pines, 2nd shot a stage shot there. The 3rd shot is Newberry in Oct and the last two are 1967 shots. Appreciate the site and the book and the history with it. Still look at it quite regularly. Will you ever release another cd? If so, would like to add some music. If you have time you can visit our site at:

and listen to "It's Alright" and other songs recorded live and in studio back in the 60's. Have a good day, and again,

I finally figured it out and hope to post tomorrow by the way there were at least two Villager bands from SC Charleston, Sumter, ?

Sent from my iPhone

We were aware of other Villager groups around and that's why we changed our names to Original Villagers way back in the sixties. We had already built ourselves to much of a following to change the entire name. We played mostly in Georgia, Florida and Alabama, more than we did in South Carolina. Thanks for posting.

There is not question in my mind that the Original Villagers as listed in the Hey Baby Days directory was a great band back in the day and the fact that they are back together and looking to record is great. Visit their site below by clicking on the link and enjoy. Of course we need to mention that there were other great bands back in the day that were called the Villagers including at least two other Villager bands from South Carolina. (Sumter and Charleston) and from what I’ve heard , they were all great bands. You have to figure from looking at the photos above that the Villagers had a great horn section .

And don’t forget Cliff Ellis’s band of Villagers from Marianna, Florida which had a regional hit with their cover of the Tams’ “Laugh It Off” How many other bands used the name Villagers back in the Hey Baby Days ?

But you need to click on the YouTube above for the Union South Carolina Villagers. They are truly a band from the Hey Baby Days

I am Gerald Cranford and I worked with "the Villagers" at Myrtle Beach I am from Union, SC and live in Irmo now. Retired from AT&T in 2003. Any friends that read this please contact me at 803-960-7940. I would love to talk to some of you'